skip to main | skip to sidebar

Posted by Unknown at 9:12 PM No comments:

I'm blogging live from Japan. First stop was Nagoya then Osaka. I'm on a bullet train now headed to Tokyo. I'll be there for the next two nights. This is my 3rd time coming to Japan. Every time I visit here I have great experiences.

I think that one cool thing about Japan is that the people here live with honor. For example, here people don't steal. I was walking down the street and saw all of these unlocked bicycles. And every-time we leave a city. Our bags travel ahead of us. At night we would put our bags outside of our hotel rooms and they would pick them up and send them ahead.

I also noticed that a lot of people wearing face mask here. You know, the kind that a doctor would wear before surgery. At first I thought that 1 of 2 things. Either they were protecting theirselves from some bad epidemic or that they were just super paranoid. I later found out that they wear those mask to protect others from them when they are sick. So I started to think to myself, Damn there is a lot of sick people in Japan. Then I realized that there are sick people all over the world. You just can't detect them because they aren't wearing a mask.

The Japanese people live with honor and a huge amount of respect for themselves, others and their environment. I feel that this is something that the world could learn from Japan's culture.

I'm looking forward to seeing what new experiences Tokyo will bring. Last time I played at Billboard Live. After the shows we hung out in Roppongi. That's was a classic trip. 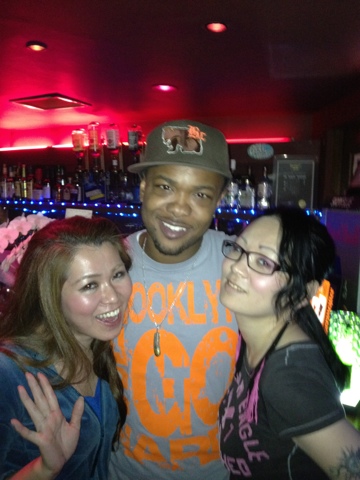 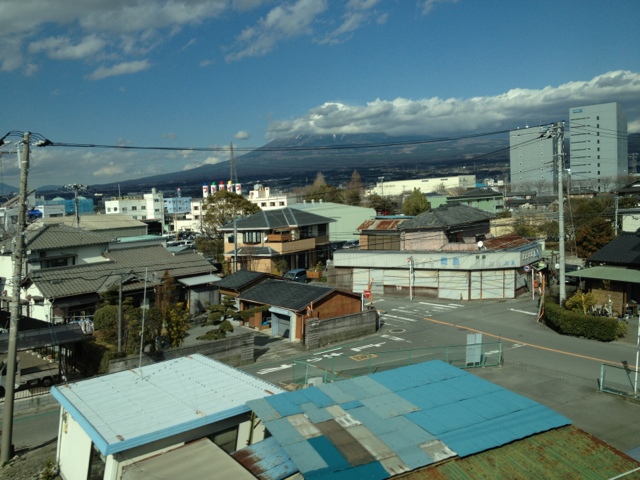 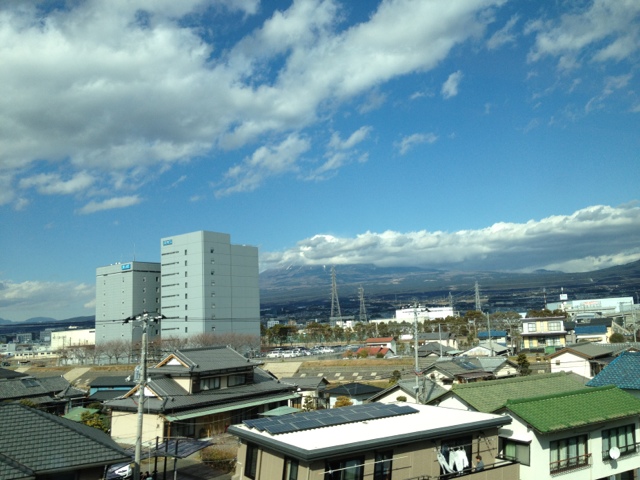 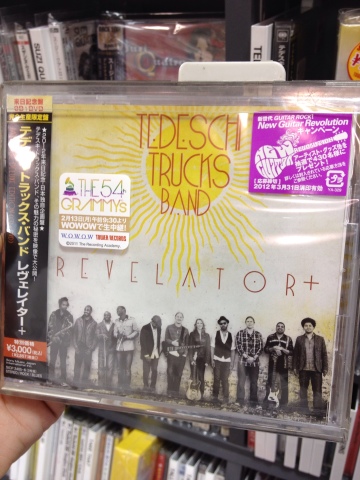 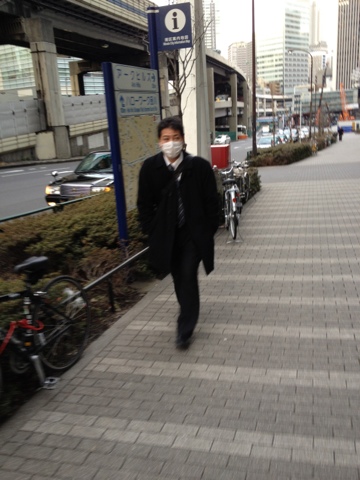 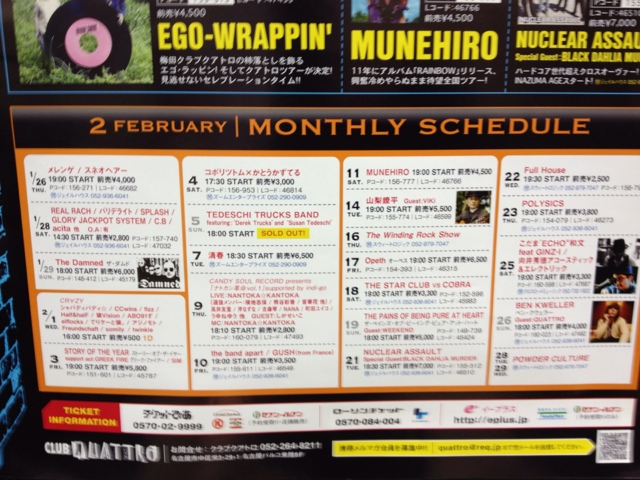 2011 was an incredible year! I was literally only home 5 to 7 days a month. I performed with my band the Maurice Brown Effect in Mexico City, Indonesia, Houston, Austin, New Orleans, Little Rock, Chicago Jazz Fest, Carnegie Hall, Apollo Theatre, Jazz Showcase etc.I spent the rest of the time rocking with the 11 piece super bad ass Tedeschi Trucks Band. The two leaders of the group are Derek Trucks (Allman Bros) and the ever so soulful Susan Tedeschi. I've been with the group since December 2010. It has been a awesome experience to play with this group and I'm looking forward to more surreal musical experiences with them this year. Our latest album "Revelator" is nominated for a Grammy this year! 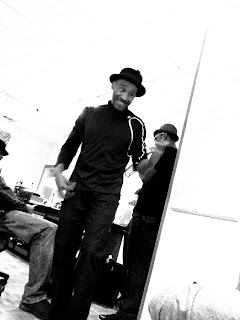 2012 has already been busy year for producing & recording. The Tedeschi Trucks band is putting out a live album this year called. I just finished recording Marcus Miller's next record and will joining him on a 6 week European tour. I've been a fan of Marcus's work for a while now so when I got the call to work on this project I was really excited. I've also been in the studio with Prodigy from Mobb Deep. I produced a record for him that's most likely gonna be a single for his next project.

As if that's not enough, I've been putting all the finished touches on the Cycle of Love remix EP Just incase your not in the loop, the remix EP features tracks from DJ Scratch, DJ Logic, DJ Center, Fire Dept, Pimps of Joytime, Sam Barsh, Chris Rob, Joe Blaxx and Devo Springsteen. The EP will also feature some special guest friends of mine such as: Prodigy, Jean Grae, Talib Kweli, Black Thought, Supernatural, P.O.S., John Robinson, Robert Glasper, Saunders Sermons, and more!I've also been in the studio working on the follow up to Cycle of Love. So far we have cut 5 tunes and I'm really excited about the direction that we're going towards.
As you can see I'm non-stop these days. I've really been on this path to find myself and I feel like I'm getting closer everyday. For some, it's hard to be original. For others it's a natural thing. I think in order to achieve this you just need to be yourself. This is easier said than done because a lot of people don't know who they are.
Posted by Unknown at 10:18 AM No comments: 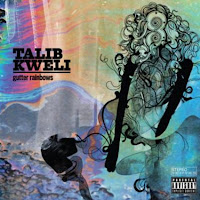 Talib Kweli's new album "Gutter Rainbow" dropped 25th digital-only in North America & all formats in the rest of the world. Gutter Rainbows is currently #1 on the iTunes Hip-Hop charts and #6 all genres. I produced the song "Self Savior" feat: Chace Infinite. The song is also on Talib's Year of The Blacksmith Community Mixtape. The are many great producers on this album such as Marco Polo, MPhazes, SkiBeatz, Nick Speed, BlaqToven, Shuko, Oh No, S1, E. Jones, Khrysis, 88Keys. You can listen to the whole album here.
"Self Savior" is the last song on the album. It features Ray Angry on keys, Nate Jones on bass and a classic Mobetta trumpet solo at the end. Mobetta makes it Mobetta...
Here's a couple of articles & reviews:
XXL
ALLHIPHOP.COM
ihiphop.com
Talib Kweli is one of my favorite MC's. I've been listening to him since the Black Star days. I'm honored to be apart of this project! Looking forward to making more music with him in the future. Blacksmith is the movement!
Posted by Unknown at 10:46 AM No comments:

As you can see there's a lot going on with me this year. My birthday is Jan 6th. I'm really excited to be turning 30! Feels like it was just yesterday when I was 16 years old sneaking into the Jazz Clubs of Chicago. Time sure does fly. I've been busy playing, producing and composing new music. My next project will be Maurice v s Mobetta. The LP will feature tracks from some of the best producers on the planet such as DJ Scratch, Devo Springsteen, DJ Center, Joe Blaxx, The Royal Family, Chris Rob & Pimps of Joytime, and Sam Barsh. I will be playing trumpet and rapping on it. I'm so hyped and can't wait to share this new music with you. Wishing everyone a safe, happy, healthy & prosperous New Year!!

Maurice
Posted by Unknown at 10:49 AM No comments:

Hi everyone!
I just wanted to personally thank everyone for all the love and continued support. I feel like the people's champ right now! Because of your support, my career has taken off to new heights. This year The Effect has travel all over the globe promoting the new album. We performed shows in India, Indonesia, London, Croatia, Spain, Italy, and all over the country. This has been an incredible year for me with the highest of highs and lowest of lows. I've made some major changes in my life and learned a lot about myself in the process. When I cut my locks off, it was a very spiritual moment for me. I feel so much more in tune with everything. I promise to work even harder next year and raise the bar. This is only the beginning. Thank you all for believing in me. Wishing everyone a safe, Happy Holiday season and a healthy & prosperous New Year!!
Much Love,
Maurice
Posted by Unknown at 2:34 AM 1 comment: 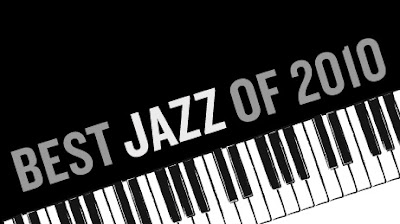 Maurice Brown, 'The Cycle Of Love'

Trumpeter Maurice Brown came up in jazz in Chicago; he found his way to New Orleans for a while, including through Hurricane Katrina, and he now lives in New York. Judging from his second album, The Cycle Of Love, he seems to have picked up various lessons along the way: earthy intelligence, urbane slickness, how to party. The global aesthetic of hip-hop is also present -- Brown works with plenty of R&B and rap artists -- and his band, especially the tenor saxophonist Derek Douget, has a certain bounce (and a few skittering rimshots) in its step. But there's also a clear compositional savvy in the 10 tunes here; it attests to a jazz pedigree. The result is a jazz record that feels like it's from musicians of the hip-hop generation -- and compromises neither genre.
by PATRICK JARENWATTANANON
Posted by Unknown at 6:39 PM 1 comment: